Ross Dhu Equestrian Ltd is the base for Morag Higgins, Scotland’s first Recommended Associate for the Intelligent Horsemanship Association who has now developed her own system of Natural Horsemanship training building on those techniques, principles and feel taught by trainers both human and equines she has worked with over many years. 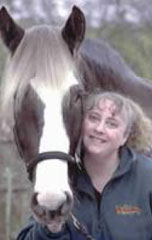 Morag’s love for horses began when she was three years old. She remembers hearing her Grandfather tell her stories about the horses who pulled bread wagons through the streets of Glasgow. By the time Morag was eleven, she had her first horse, Bruja. They competed in pony club games as well as unaffiliated showjumping competitions.

Less than ten years later, Morag and Bruja qualified for the Horse of the Year Show in the Newcomer division

The very next year, Morag and Bruja qualified for Horse of the Year Show in the Foxhunter Division and they continued to jump BSJA till they retired at Grade B level. By 1991 Morag competed as Team Leader for the local riding club for Dressage, Cross Country and Showjumping. She took that club to the National Finals. 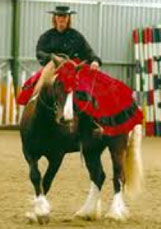 Morag continued to compete regularly, branching out into the disciplines of Western riding in trail, pleasure and reining classes until the death of her beloved mare Bruja brought her horse centered life to a halt. Morag felt she’d never have the heart for any other horse, and for the first time in her life thought about not owning horses anymore. When her husband Mark showed up one day with a brown and white paint horse they named Brogan, Morag knew after one look in his chocolate brown eyes that she and Brogan were a good match.

During the next decade, Morag brought Brogan along as they competed in Showing In Hand, where they qualified for the Royal Highland Show and placed fourth. They also showed in Working Hunter, Show Hunter, Coloured Horse, Western Pleasure, Trail, and Reining. Morag qualified for the Scottish Recommended Associate for Intelligent Horsemanship, studied for her BHSII levels, and in 2005 she and Brogan were crowned Western Reining Champions of Scotland after riding with Mark Rashid earlier that year. 2005 was also the year that Morag qualified with the Western Equestrian Society as a Western Riding Instructor.

In 2006, Morag began to write the training system Equido based on what she had learned from Mark Rashid’s horse training principles. She also earned her Bachelor of Science degree in Equine Science. But it wasn’t all studying and paperwork. Morag and Brogan continued to compete in Western Riding classes, and Morag and her husband continued to build their own yard, Ross Dhu Equestrian, on the land they had purchased two years earlier. Equido became recognized by LANTRA, and Morag bought and retrained an ex-Trotter named Slipper and showed him in Western Dressage.

Over the next decade, Morag immersed herself in learning. She became a Western Dressage judge, wrote her first book”Bruja”, launched Equido in Spain, Germany, and Wales. She purchased and began training with a six-month-old foal named Poppy, wrote her second book with her husband Mark “Equido: Horsemanship for the 21st Century”, developed corporate training programmes and therapy programmes for Serving and Ex-Military Personnel in partnership with Rae Coaching. She then published her third book, a work of fiction called “Eye of the Unicorn”, and another book outlining she and Mark’s nationally popular human and equine training course “Equido: The Path of Least Resistance.”

Morag has been training in the martial art of Ninjitsu since 1984. She continues to train and has earned the ranking of Fourth Dan (fourth-degree black belt).

Throughout her lifetime, Morag has grown from a competitor in multiple disciplines to judging those disciplines, to buying and training horses to compete successfully. She takes each horse’s innate talents into consideration before preparing them for an event.

Equido’s principles are the result of her and Mark’s lifetime of learning and knowledge about all things horse. They offer students and their horses a unique perspective on ways to relate that aren’t founded on domination or fear and instead encourage horses to trust people and people to communicate better with their horses.

Mark has been working with horses for 18yrs and is one of the co-writers of Equido.  As a Level 4 Instructor he currently specialises in Groundwork and teaches both privately and at clinics throughout Scotland.

Mark heads the Equido Horsemanship association and plays an integral part in the training of external and internal client horses who are looking to find a softer feel in their work.  He has trained in the Martial Arts of Aikido and Ninjutsu and incorporates the philosophy of timing, energy and feel into his groundwork sessions.

Click here to read about our latest news and events

Click here to find out more about our range of books.

Click here to find out about our Spanish Equido opportunities

Click here to find out about our livery services

Click here to find out what others are saying about us