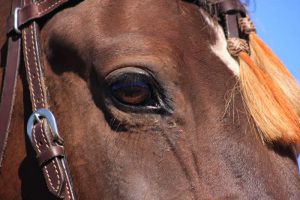 See how Equido can improve your horse.

After a difficult start in life, Slipper has been progressively rehabilitated using Equido methodology.  To see where he is today watch the video below.

He continues to improve, see how he works on a more elevated outline.

This system gives the student the unique chance to qualify in an alternative training system based on Natural Horsemanship philosophy.

Our system is regulated by LANTRA Awards (further details of this Government Run Qualification Authority can be found on their webpage) and students will receive certificates from both Equido and LANTRA for their Level completion.

What does this mean?

LANTRA are our regulatory body who audit not only our training system on an annual basis but also our ability to deliver the system.

We are audited on our training facilities to ensure that they are in line with regulatory requirements and to ensure that we are in a position to provide the best possible safe training environment for our students.  This includes scruitiny of our Procedures, Work Instructions, Health and Safety Procedures, Fire Safety Records, Accident Reporting, Record Keeping, Administration Systems, Computer Records and Back Up Systems.

Our Assessors and Trainers are also audited to ensure that they all have a Continual Personal Development Plan that is geared towards improving each individual in their ability to train and teach students in the Equine Industry.

Our own Internal Auditing of our teaching notes and training system is also checked to ensure that every single piece of documentation and every single module in the entire system is audited every six months to ensure the very latest information is being passed onto the students.

We are currently the only Equine Training System to have a Quality Assurance Programme in line with ISO 9000/2000 and this allows us to offer you the student the very best in an educational experience.

WHAT IS INVOLVED IN THE EQUIDO LEVELS?

This level introduces you to the concepts and teachings of Equido whilst ensuring that you fully understand the basic requirements of horse care management. The level is split into ten modules and the student can choose the order in which to sit the modules (most do the simple ones first and get them under their belts). If there are any modules that the student is not too sure of then they can request a group lecture or private coaching session on that subject as part of their course fee. This can be arranged at a time to suit the student.

This level is more in depth with regards to the horse care and management and begins to introduce the student to the concepts of Natural Horsemanship and the Equido system of work. It will introduce the student to the theories and concepts of energy and how they apply to the training of the horse. Again, everything is taken from the equine psychological point of view to allow the student to really begin to understand the equine mind and lay the foundations of good communications. This level is split into ten modules and again the student can choose which modules to sit and when. Any additional lectures or practical experience can be gained on site at Ross Dhu Equestrian at each student’s request.

Many students will be happy with the knowledge gained in Levels 1 and 2, but for those keen to learn more Level 3 offers concepts and teaching that can enable the student to fully acquire the knowledge of a professional Yard Manager and Horse Trainer. It is at this level that the use of energy and Equido training ethos is applied and students may wish to begin to diversify into specific areas of expertise. For example, some students may prefer to specialize in work from the ground as opposed to ridden techniques. Again the level is split into modules, this time there are 10 modules. This level is designed for those who wish to pursue a career in the equine industry and is geared to give the student the appropriate knowledge required for the training of horses in different disciplines using purely natural horsemanship techniques developed by Equido. A huge emphasis is put onto the psychology of the horse and meeting the training requirements whilst satisfying the needs of the horse. It will be a revelation for some students that you can produce top quality competition horses using totally alternative training methods without compromising on performance and ability.

This is a requirement for those students wishing to be Instructors and Trainers in the Equido system. There are 8 modules two of which is optional. This level will also introduce the student to basic business management skills and booking keeping requirements when running your own business. This is the highest level an Equido student can attain and will qualify them as Professional Trainers and allow them to teach students of their own under the Equido umbrella. This level will also require the student to train and produce a minimum of four horses in their chosen discipline over a period of four months and keep all training records and client reports necessary.

At all levels extra lectures, one to one training sessions can be arranged at no extra costs.  Each student will have a dedicated instructor who can be contacted at any time by phone or by e-mail.

How are exams carried out?

All exams are on a one to one informal basis.  They are mostly oral and practical based with written homework required for some modules.

If you do not have access to a horse to bring  your practical skills up to speed, we at Ross Dhu Equestrian can provide suitable horses to work with to gain experience.

Please contact us for any more information or if you have any special requirements, we are happy to discuss what we can do to meet your needs.

How are exams carried out?

All exams are on a one to one informal basis.  They are mostly oral and practical based with written homework required for some modules.

If you do not have access to a horse to bring  your practical skills up to speed, we at Ross Dhu Equestrian can provide suitable horses to work with to gain experience.

Please contact us for any more information or if you have any special requirements, we are happy to discuss what we can do to meet your needs.

What other learning opportunities are available?

If Equido is not quite what you are looking for at the moment we are able to tailor make courses to cover any areas you specifically want to do, please see our Other Courses page for further details.

Partnership with Other Training Bodies

We at Equido work closely with other educational bodies and charities to provide a full and diverse system.  Argyll College will be launching Equido Level 1 and 2 in August 2010 to allow students on the West Coast of Scotland the opportunity to gain this qualification.

Our new Equido centre is Spain is also launching Equido Level 1 in August 2010 spreading this unique training system to Europe and allowing exchange students from the UK and from Europe to visit both Ross Dhu Equestrian and HappyHorse.

Ross Dhu Equestrian and Equido are also long standing supporters for the Charity VARDIS which provides support and counseling for vulnerable children and offers them hope and a brighter future.

SCOTLAND’S LEADING natural horsemanship yard will be offering students yet another opportunity to study Equido on the West Coast of Scotland.

Industry-accredited Ross Dhu Equestrian, which has its original base in Larkhall, helps horses overcome their emotional and behavioural problems and is not letting the economic downturn affect its success as its waiting list of clients increases and staff recruitment is at an all time high.

Defying the recession, the company has increased from just one member of staff in 2004 to five today, and has worked alongside and trained major organisations such as Scotland’s animal welfare charity the Scottish SPCA on how to handle large animals.

Enjoying a reputation as the leading rehabilitation yard from the home of Super Vets, the veterinary centre in Liphook, Ross Dhu work to provide an environment for horses recovering from severe injuries, as well as training equestrian owners on how to communicate with their animals.

Built five years ago by best-selling author, Morag Higgins and her husband Mark, the centre offers an opportunity for horses to be housed and students to study a comprehensive training method and system that has been tailored by Ross Dhu Equestrian’s 30 years of experience to bridge the language barrier between horse and rider.

Catering for beginner and advanced levels, a fast track level one option has recently been set up due to high demand, which helps eager students qualify in a short space of time, particularly useful if they are in full-time employment and can only study during holiday periods.

The system teaches how to use control and balance to influence a horse’s movements and state of mind. Two of Ross Dhu’s students have recently fully qualified as Equido level fourtrainers. Fifty students are enrolled on the course and two colleges and universities have shown interest in taking on Equido as part of their curriculum.

Morag said, “The further opportunities to study Equido  at different centres throughout Scotland is a response to the long waiting list we currently have and is definitely a good strategic step for the business. “Ross Dhu was built with the sole aim of meeting the needs of the horses and their owners and we have set the standards for natural horsemanship yardswe’re thrilled with the progress we’ve made from being a small business to getting to where we are today and just hope the students keep coming.”

Looking forward to the future, Ross Dhu will be carrying out training clinics around Scotland to demonstrate their methods and techniques. Morag has been recognized as top alternative professional trainer and has been involved in lecturing trainee vets from the Royal Dick Veterinary Hospital.