Raven came to us with his new owner who had purchased a horse from a dealer for her husband who was a very novice rider. The horse was completely unsuitable and so she asked for an exchange. The dealer brought Raven. He wasn’t called Raven then but Satan. The new owner knew instantly that he had real issues and so asked us for help. Raven bit, reared, struck out with his front legs at anyone who tried to work with him. They had to sedate him to load him to bring him to us as he kept flipping over backwards.

He arrived and we ensured that he had been checked by the vet who had sedated him to make sure there were no obvious physical reason for his behaviour. The next day we went into the pen to see where we were. Raven was very, very defensive. He had learned a whole host of behaviour designed to keep humans away from him and was very quick to go on the offensive. When I say he bit, I don’t mean he nipped, at one point his whole mouth was around Mark’s side in a full on bite. We finally managed to have him approachable without his front legs striking out. The following day we decided to see if he would accept a saddle because he had been sold as a riding horse and at 14yrs old we expected he had been ridden at some point. As soon as he saw the saddle he flipped out and tried everything he knew to keep us away from him. It took some time but we did get the saddle on. He let us do up the girth then immediately flipped himself over backwards. After he got up we let him walk a few steps then took the saddle off. I went into the house and called the owner explaining that his behaviour was extreme, he could be dangerous in the wrong hands and that at this stage we were not sure if it was all in his mind and how he had been handled or if he had a physical reason to behave this way. I advised that he could inadvertently kill someone with less experience. The owner advised that she would get the vet that day to put him down. I suggested that she give him at least a week with us to let us try to convince this horse that not all humans were going to hurt him. 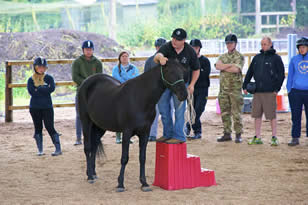 That evening I was passing the round pen he was in and I stopped and looked at this beautiful horse with a kind eye. I shook my head and said, “how did an nice horse like you end up in a state like this.” He just looked at me. I brought my horse Slipper in to ride in the arena next to the pen. Raven watched intently and when he saw me get on Slipper he flipped out, screaming and running up and down the fence line frantically shouting at Slipper. I decided to let things play out and let Slipper walk round on a loose rein, he was completely unconcerned. He stopped at the fence next to the round pen and he and Raven stared at each other for quite some time. Raven was still and silent his eyes wide, staring and Slipper calmly looked him in the eye. I don’t know what they were saying to each other but Raven stood quietly watching the rest of the session with Slipper and never moved or made a sound. Slipper of course was a star, working really well and getting lots of praise.

The next day Mark went out to work with Raven and he was a completely different horse. He didn’t rear, he didn’t strike out he didn’t panic. He only offered to nip out of habit as we slowly tightened up the girth. When we asked him to move on he went quietly without fear or fight. Within two days we had a rider on him and found him a very willing horse, eager to please but stiff and unsure.

Our Shiatsu expert Andrea Hibbert was visiting on her regular schedule to work with our horses and we asked her to work with Raven to make him more comfortable. As she gently worked out his tension he began to just let go. I found myself standing with tears streaming down my face, Andrea was crying and Stephanie our yard manager was crying as this horse started to dare to hope that he had a chance at life.

Within months this horse was working beautifully, he had settled in the herd and would gently wicker when we approached looking for a pat and cuddle. His owner knew that he would not be suitable for her husband and asked if we could find a new owner for him and so he was put up for sale. Mark and I had a long chat about this, we knew that this horse would need a special person who would understand him and be experienced enough to deal with his insecurities, we had to be very careful about potential buyers. Eventually I called his owner and asked how much she wanted for him as we would be interested in giving him a permanent home. His owner burst into tears and said she didn’t want a penny if he could live his life out with us happy and safe.

Raven has been with us now for two years, he is one of the friendliest happiest horses here, he welcomes you every time you go in the field, he is an expert groundwork horse, helping students learn how to work with horses in a sympathetic way. He is a favorite to ride by the intermediate riders and he absolutely loves his job. He is having so much fun, doing dressage, playing games, getting dressed up in fancy dress and mucking about with us mad humans. He has a home, he is safe and he wants to give back to people the confidence that he has regained. He is literally a horse that came back from the brink of death and he is looking for help to build him a new house so he can snuggle up on cold winter nights and give his now older body a well earned rest.

No Events were found.